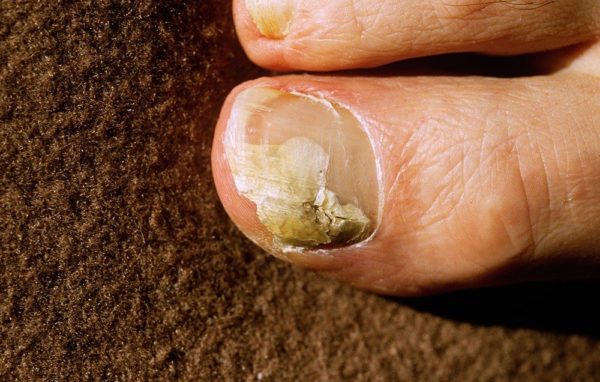 Toenail infection is highly infectious hence could spread quickly from nail to nail if not treated promptly. This infection which is more common in older adults, though all age groups are susceptible to it, spreads from person to person. Before we answer the question of can toenail fungus spread internally, let’s take a look at some of the symptoms of toenail fungus infection.

So Can Toenail Fungus Spread Internally?

Though very rare, there are cases when toenail fungus can spread internally – the fungal organisms enter the bloodstream. These rare cases are usually seeing in patients with a suppressed immune system, for example, patients with health issues such as HIV and diabetes. In cases of internal spread, there is no evidence that toenail fungus can affect the bones though bones can be invaded by bacteria or fungi resulting in a condition called osteomyelitis.

When toenail fungal infection reaches internal spread level, fatigue, fever, and flu-like symptoms are often experienced. If you feel you are experiencing these symptoms, contact you’re your doctor immediately.

It is highly unlikely for a healthy person to experience the internal spread of toenail fungus. Now that the question ‘can toenail fungus spread internally‘ has been answered, here are why you should not ignore toenail fungus infection.

The slightest sign of toenail fungus e.g. minor discoloration must not be ignored. Ignoring toenail fungus could prove to be very costly in a short time. Many people tend to ignore it because it can seem really insignificant.

The dangers of neglecting toenail fungus infection include:

Foot pain: an untreated toenail fungus infection can quickly deteriorate into thick, brittle, and crumbly nails which could be very painful. In this situation, it can become quite difficult to walk especially when wearing shoes.

Fast spread: toenail fungus can quickly spread to surrounding skin and other nails if not treated promptly. The spread of this infection could result in a skin condition called athlete’s foot. This condition is characterized by red, itchy, and cracked skin. Untreated toenail fungus can also become jock itch when it spreads to the genitals.

Widespread infection: for people with underlying health issues, toenail fungus infection can quickly spread to the skin where it can cause a crack hence opening the skin for bacteria infection. This can become deadly when it enters the bloodstream hence toenail fungus must be treated promptly.

Loss of nails: toenail fungus can result in onycholysis, a condition where infected toenails are separated from the nail bed. Therefore, there would be a need for removal of the loose end. Besides loose ends, removal of infected nails may be necessitated if it does not respond to traditional treatments.

Lower quality of life: toenail fungal infections are not life-threatening for most people but could however greatly impact the quality of life if left untreated.

Treatments of toenail fungus could be as easy as engaging home remedies such as the use of oils such as coconut oil, tea tree oil, and olive oil. These oils can be applied daily to the affected areas to treat toenail fungus infection.

OTC products: over-the-counter products are very effective in the treatment of toenail fungus infection. These products include Fungitis, Kerasal, Emuaid, and EmoniNail. They contain active ingredients loaded with antifungal properties that help to eliminate fungus infection from its source. They also contain unsaturated fatty acids that allow deep absorption for effective results. Healing properties of some of the oils used help to enhance the healing of the infected nail resulting in the growth of a clear and healthy nail. These products are mostly for external use and are largely safe. They do not require a prescription or a license.

Oral medications: there are medications that can be taken internally to fight toenail fungal infection. A key problem with oral medications is the side effects which could include damage to internal organs like the liver. Fluconazole is dangerous for patients with liver disease. Other medications include Sporanox and Lamisil.

Laser treatment: this involves the use of light-activated agents on the affected nail and then shining of light of the right wavelength on it.

Surgery: surgical treatment of toenail fungus involves the removal of the infected nail. The infection will reoccur if the surgery is not followed by the use of antifungal medication.

We hope we have been able to answer the question “can toenail spread internally”, if you have any further questions, please use the comments form below.